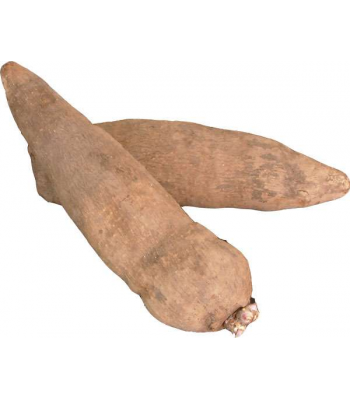 Yam is the common name for some plant species in the genus Dioscorea that form edible tubers. They are perennial herbaceous vines that are cultivated for the consumption of their starchy tubers. The name yam is derived from West African languages such as Fulani, Serer, and Wolof. The word is a mix of verbs which simply translates “to eat.” Let’s tell you a tale we heard about the origin of yam. There was a man who found yams growing in his backyard, he decided to give it a try and cooked it. Scared that it may be poisonous, he wrote a letter stating that he was about to consume the plant he found. In a situation, he’s found dead, whoever reading it should know that it was caused by the yam. Fortunately, he didn't die and now Yam is eaten everywhere. This is a mythical tale but yes, we are grateful to whoever brought about the consumption of yam. It is an important dietary element for the Nigerian people and a major source of income, especially for local small-scale farmers. It’s available all year round and can be prepared in several ways. It could either be fried, boiled, roasted, pounded or baked. Whether it's served with stew, sauces, soups, poultry, fish, palm oil or even made into a porridge; it is a delicacy. Yam has gained its popularity not because of its versatility but also for its nutritious content. Yams are rich in carbohydrate hence they provide a lot of energy when consumed. It also contains vitamins and small amounts of protein. There's a speculation in the southwestern part of Nigeria, that regular consumption increases the chances of conceiving twins. How true? We don’t know but there’s no harm in trying, you’ll be doing your body good.

At Nkataa, we stock fresh yam tubers and we’ll deliver to you anywhere in Abuja. Sit back and relax, we’ll get it to you in no time, all the yam you want is just a click away. Our yams are fresh and if stored in the right condition will remain so until ready to use.

Buy Yam (Tuber) at Nkataa for the best price in Abuja. It’ll be delivered straight to your doorstep.